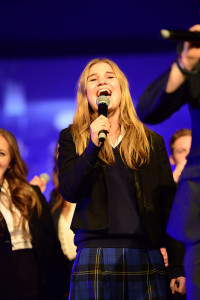 The Voice Festival team are really excited that preparations for the 2014 Youth Competition are underway and applications are open – so we thought we’d take a look back to 2013 and find out what last year’s champions have learnt from their experience, and what they are up to now. Martha Gray, last year’s leader of the group, had this to say…

The Voice Festival UK was an amazing opportunity for us to meet other groups and take part in an extremely beneficial workshop which allowed us to develop not only our arrangement skills but also focus on the importance of musicality within the group. The help and guidance that we received from In The Smoke and Dominic Peckham was hugely valuable for us. The workshops throughout the day geared us up for the competition which took place in the afternoon. The competition itself showcased the immense talent of all groups who entered and we were hugely surprised and proud to win.
Collectively we would like to thank the Voice Festival UK for allowing us to take part in such a fun and beneficial day.

Since the competition, the group have performed in many events, including to 3500 people in a huge tent here at Wellington. They have continued to work with younger children from other schools, introducing them to the world of A Cappella by teaching them songs and performing alongside them.

The highlight since the competition was the recording session with Liquid 5th Productions. This was kindly given as a prize for being chosen as Youth Champions in 2013. We recorded the 2 songs as sung in the final and they are available on iTunes and Amazon. They reached No.4 in the iTunes vocal chart for a while before Christmas.

All proceeds go to the Jimmy Higham Bursary Fund – set up in memory of a young teacher at Wellington who died 2 years ago.

Congratulations to the group for all they’ve achieved in the past year, and do go ahead and download their record – it’s for a wonderful cause!