When we were invited along to Devon Music Education Hub’s MIX festival in Exeter on 2nd July, we didn’t really know what to expect. What Catherine saw on the day exceeded all expectations!

Devon Music Education Hub run a day long festival in July every year that thousands of school children from the area attend to watch, listen and try all sorts of different types of music. To say it’s a mini-Glastonbury is an understatement – what is on offer goes so much further than this, it will inspire generations of young musicians in Devon for many years to come. This year, the a cappella offering was a couple of performances and workshops from the University of Birmingham group, SOP. 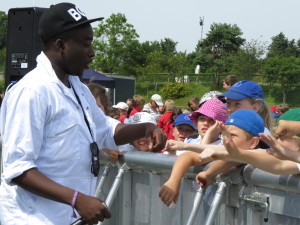 SOP performed 2 superb sets to the rapturous crowd who whooped with delight, begged for autographs and sung their hearts out to scintillating medleys – the crowd favourites included “Let it Go” from Frozen and hit of 2014 “Happy” by Pharrell Williams. With some of the moves I saw, I reckon there are definitely some future Sons in that crowd. 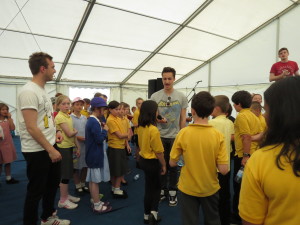 The 2 workshops each had about 500 students from aged 7-18 joining in – a tough crowd to say the least! The group rose to the challenge though and gave all the young people an insight into what its really like being in an a cappella group. As well as a quick attempt at beatboxing, we all sang a rendition of Jessie J’s “Price Tag” and even managed to write a completely original song all wrapped up in an hour! Lots of students went away with the sound of a cappella ringing in their ears along with a CD of “The Voice Collection 2013” to listen to other spectacular a cappella offerings.

After a fantastic day, the only question that comes to mind is – can we come back next year?!