For a number of years we at The Voice Festival have collaborated with our friends at London A Cappella Festival to put on a schools event during the 4 day LACF takeover of Kings Place. This year, things were a bit different… Instead of bringing established groups together, we invited some schools that are just starting their journeys forming new a cappella groups. And what a day it was!

The brilliant Michael Humphrey kicked off the workshops for the day helping students and teachers alike develop the skills to learn and write a cappella music – it was a cappella by numbers! Amazingly, after less than an hour, we were building tricky chords, singing any interval under the sun and had 3 part complex rhythms going on.

A brief break for everyone to catch their breath and we were off again learning an arrangement of Uptown Funk from scratch. You would never believe more than half of the group hadn’t even TRIED a cappella before. An hour later, there was a very impressive version of the Bruno Mars/Mark Ronson hit being sung. Oh, and on top of that, a short mash up section incorporating some fabulous Michael Jackson, Clean Bandit, and Jessie J solos.

After lunch, the groups were treated to a rendition of Weather to Fly by The Swingles. There were LOTS of wide eyes and open mouths as they looked desperately round for the drum kit. There wasn’t time for the kids to hang around though as it was time for our new students to start writing their own music. Midway through the session the Swingles decided to recruit a new member from within the hall, but realised that their next tour to the US would be tricky as Callum had to be back at school on Monday. The day was wrapped up with a performance of Uptown Funk, a listen to Glyn School’s version of Forget You and a special song about that night’s takeaway menu.

But that’s not the end of our links with these, all the schools will now head off with their new found skills and start a cappella groups in school as members of this year’s VF-UK School Start-Up scheme. So watch this space – this won’t be the last you hear of Glyn School, St George’s RC School & William Ellis! 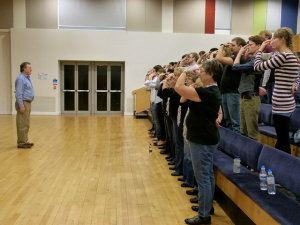 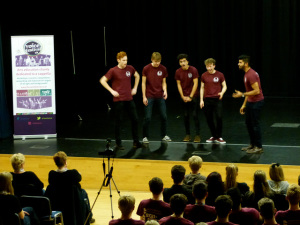 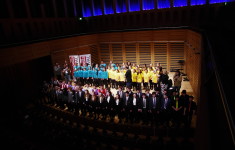