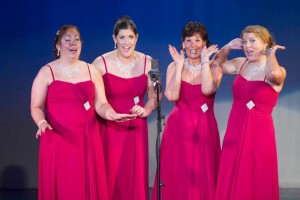 Next up in our series of spotlights on our fabulous Fringe Festival performers is a peek at the ladies four-part community a cappella group The Vocalites. They share some of their favourite moments from the last year and tell us what lies ahead for the rest of 2014!

Remember, the VF-UK workshop and a cappella showcase – featuring the Vocalites and much more – takes place at Greyfriar’s Kirk, Edinburgh, on the 8th August, and there’s still time to grab your tickets. Don’t miss out!

There are 4 people (of course!) and they have been together for about 4.5 years. They are Alicia Tindal (lead), Juliet Erskine (tenor), Kate McGeoch (baritone) and Jacqui King (bass).

Last year they sang in the Spiegeltent at Edinburgh Literary Festival and in the Mitchell Theatre in Glasgow amongst other venues, and competed in Llandudno and Bangor, N.I. The Vocalites are part of the choir singing for the baton relay celebrations at both Inverary and Dumbarton Castles this month, and have recently won through to the semi finals of this year’s Ladies Association of British Barbershop Singers (LABBS) national competition so will be heading down to Harrogate in October for that. They also hope to be in the finals of Scottish Power’s Got Talent, but that has yet to be decided!

They won’t be appearing anywhere else in Edinburgh, sadly, but are looking forward to their appearance at the VF-UK Edinburgh Fringe Showcase this year.