This is a guest post by Peter Brill, member of Bristol-based community a cappella group, Original Sing. 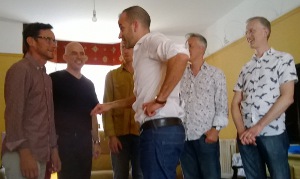 If you had paid a significant sum to attend an a cappella masterclass (even if some of it was a very generous Voice Festival prize) and hadn’t sung a note after one hour and 20 minutes, most groups would be asking for their money back.

But this particular workshop was with Dominic Peckham – former Royal Opera House-chorus-member-turned-conductor – whose choral leadership star is now rising rapidly in the a cappella firmament and whose masterclasses are, quite simply, out of this world. 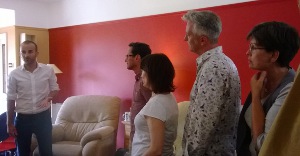 For Original Sing, Bristol-based 2013 Voice Festival Community Champions, the first hour or so of Dominic’s dedicated masterclass was, in many ways, the most valuable. This isn’t to take anything away from the remaining five hours or so that was spent in the company of an inspiring, perceptive, highly technical, often demanding and frequently funny maestro. Yet the opening session, with its focus on posture and position, led to a transformation in individual and ensemble sound that was to last for the rest of the day and well beyond.

Much of the workshop focused on minute detail, such as pronunciation of vowels, which would ordinarily seem tedious and even irrelevant. But the reality for a group that is trying hard to take an already well-rehearsed, well-honed sound to the next level, is that these tiny details matter. Everyone found enormous inspiration in hearing our 12-voice version of Whitacre’s Water Night dramatically improved simply by ensuring that each word was pronounced in exactly the same way and with an identical mouth shape. 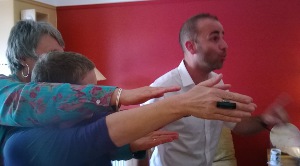 Throughout the session, Dominic dropped in small hints, tips and ideas – from warm-up routines to leg and foot positions – which turned on individual light-bulbs for everyone in the group. In fact, there was so much to take in that the session had to be videod for future reference. His highly personal and personable approach made it easy to learn and even criticism was delivered in a way that made it seem like a compliment.

It is little wonder that Dominic is in such high demand from some of the best choirs and chorus’ in Europe. His insight can turn ‘good’ into great, aspiration into inspired, and that is worth its weight in gold.