We always love it when groups from across programmes meet up to learn from each other – so imagine our delight when we heard that Out of the Blue – veritable a cappella celebs and current Voice Festival Champions – were heading to Eynsham Community Primary School in Oxfordshire to show them some a cappella basics.

What follows makes Voice Festival blogging history – our first guest post written by primary school children! Congratulations to everyone involved in the day – we hope it inspires other groups to get stuck in with a cappella collaboration and education.

We were lucky enough to have Out of the Blue come to Eynsham Primary School on Thursday 18th December to teach us some songs and warm-up exercises.

First OOTB performed in assembly to the whole school. The song that they sang was called ‘Hips Don’t Lie’ and everybody loved it. After that they did a quick piece about themselves so that we knew who they all were, although some of us had already learnt their names! Then every class had the chance to take part in a workshop with them.

The workshop began with Out of the Blue singing us one of their songs and the best part was Jack’s dancing. Then we did some warm-ups such as an exercise to warm up our bodies where we had to shake different parts of our body and count down from 8. Next Joel gave us a quick tutorial about beatboxing which really improved our original skills. Finally Roshan taught us how to sing one of their songs – ‘The Lion Sleeps Tonight’. We were all very sad when we had to leave, but glad for the concert in the evening.

We were really lucky because OOTB came down to our class and we got to ask them questions. A few boys in our class also performed two songs for them (‘Hips Don’t Lie’ and ‘C’est La Vie’) with dance moves – it was so funny. They want to be in Out of the Blue when they are older.

In the evening Out of the Blue performed a concert in our school hall and lots of people attended. They sang lots of brilliant songs including ‘Silent Night’, ‘Rolling on the River’ and ‘Lady Marmalade’.

During the concert all children in the audience were able to perform ‘The Lion Sleeps Tonight’ on stage with them. It was AMAZING and we had so much fun!

Here are a few quotes from some children about their time with OOTB:

“Absolutely wonderful! The best part was teaching us how to beatbox.”

“The best part of the day was when Singing Squad got to sing to Out of the Blue in assembly.”

“I really enjoyed Domhnall teaching us the song ‘My Bonnie Lies Over the Ocean’ and we had to bob up and down when a word started with ‘b’.”

“My favourite part was when a few of us sang and danced for Out of the Blue.” 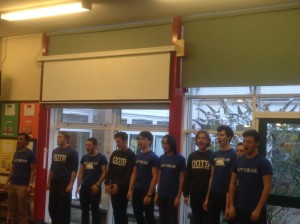 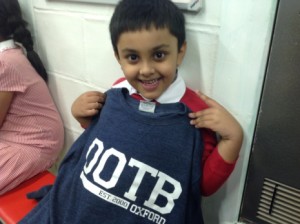 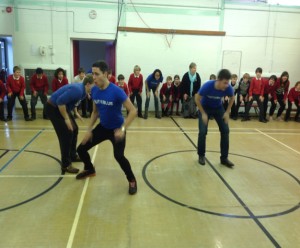