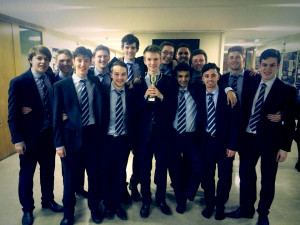 Winning the Voice Festival University Competition was undoubtedly the most exhilarating feeling of the year so far! The fresh group – containing eleven new members – got off to a flying start in October and grew in confidence and togetherness in the December UK Tour. Our second term until the Festival Weekend, however, had been one of high stress and intensity, with seemingly little gain due to a frustratingly small amount of performance opportunities compared to the previous term. The competition provided a much-needed goal towards which the group could work, and the members bonded through a great deal of blood, sweat and tears (especially sweat in choreography rehearsals!) to come to the Festival Weekend in high spirits.

The weekend itself was a fantastic opportunity for the group to spend time together away from the pressures of usual Oxford term-time life and also to socialise with other university groups. This meant that, by the time we arrived backstage immediately before our Final performance, we all felt a unified collective buzz and a complete confidence in one another. That was perhaps the most exciting thing – looking around at each member before the performance, and knowing we had a really good chance of winning.

Not even that inner trust could have prepared us for the feeling when our name was announced as the winner, and for the special awards we received on top of that. All of intense work we had put in that term was now worth it and we returned to Oxford with a new drive to continue working and succeeding. Off the back of this achievement, we are thoroughly excited to take what we have learnt from the Voice Festival experience away with us on our Easter tour to California, and also on our month-long run at the Edinburgh Fringe Festival in August!