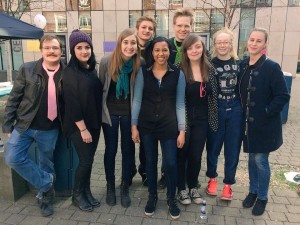 Jess seen here third from right with her group, The Kingstones

Our very own VF-UK team member Jess reflects on her journey to being in her very first a cappella group, her role within VF and more!

It’s no secret that I love a cappella.

It originated through late night YouTube searches of my favourite songs, but when I moved to London for university, I was introduced to a whole new world – a bubble of a cappella, if you will. Attending the Voice Festival weekend in 2014 and seeing so many incredible groups not only competing against each other, but also bonding as part of a community cemented it in my mind – I wanted to be part of a group myself.

But where did I start? I didn’t know anyone crazy enough to start a group with me, and I wasn’t sure how to do it by myself. I knew I wanted to be involved in any way I could, so I joined the Voice Festival team in June 2014. We published a guide a few months later on how to start your own a cappella group (which you can see if you click here), which included a list of questions to consider such as group size, group name etc. Reading it made me want to start even more!

In October 2014, a girl posted on a Kingston University Society page on Facebook saying that she wanted to start up an a cappella group. I couldn’t believe it! I contacted her straight away, and soon, The Kingstones was born.

We initially tried to start as soon as we had enough people (around six), but due to scheduling conflicts and commitment issues with some members, we stopped and retried at the beginning of this year. We’ve definitely hit roadblocks – deciding a name one of the big ones! – But on Wednesday 11th March we had our first public performance as a part of our University’s Global Week. Some of our group had never performed in front of a crowd before, so naturally we were nervous, but we all had loads of fun and the crowd were really supportive, too.

I’ve taken on the role of media manager in which I manage all of our social media accounts (@KUKingstones and The Kingstones on Facebook, go follow/like us, yeah?) and make decisions on things such as logos, t-shirts etc. although we all help each other out, too. We sing such a wide range of music – from The Muppets to Hozier – which means that there’s never a dull moment in rehearsal! We’re already planning our next performance opportunities, and we can’t wait.

Joining a group and getting involved with VF-UK has been one of the best decisions I’ve made. It has not only enriched my university experience, but also taken me to places I would never have visited, opened me up to new experiences and challenge my leadership skills, too.

The recent Festival Weekend in Birmingham was such an incredible whirlwind. I’ve never been involved in something as big as this before, and even though it was hectic and so fast paced with 400 things happening at once, I loved every second of it. It actually made me a little bit emotional to see so many diverse, talented, wonderful people all in one place celebrating each other’s successes. The level of talent this year was insane, and I can’t wait to see how the UK a cappella scene progresses.

If you’re considering either starting or joining a group, or even just getting more involved in the a cappella world – my advice? Do it!