What’s it like to win the VF-UK youth competition? The Dreamettes tell us here in their guest blog. If you’re feeling inspired by the girls’ successes and would like to get involved with the Voice Festival’s youth programme, check out our dedicated page here, or take a peek at our plans for VF-UK’s annual Take the Stage event. 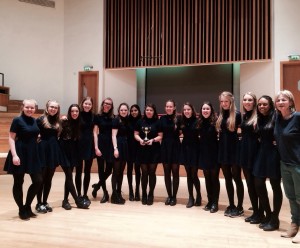 The Dreamettes was formed back when we were in Y7 at Putney High School (now all in Y13). Our music department is unusual in that every single year group is represented by at least one a cappella group, if not two in most cases. Thanks to this strong a cappella tradition in the school, the Dreamettes have flourished, growing in membership and ability year by year, as well as triumphing in school music competitions.

But it was taking part in the Voice Festival UK that pushed us to our limits and made us realise what we could achieve. Suddenly a cappella became so much more than standing in a semicircle to sing a pop arrangement, and our motivation was raised to a new level. Heated discussions about choreography and presentation, which would have been given nowhere near as detailed thought a year ago, became the norm. Musical details such as note lengths, tuning and dynamics were now more vital than they had ever been before. We even dedicated some of the Easter Holidays to rehearsing for the VF-UK finals at group members’ houses (in hope that the neighbours would enjoy our heart-melting rendition of ‘Make you feel my love’)!

Soon the day of the Finals arrived, and Dreamettes set off to Birmingham, all squeezed onto a minibus with the two other a cappella groups from Putney High taking part, not forgetting three of our teachers. Many were still half asleep, but after being perked up by a trip to Costa Express en route, excitement levels began to peak. The whole coach was singing in full voice as we drew nearer towards the city.

We finally reached Birmingham Conservatoire, where the VF-UK organisers and participants were met by a crowd of 30 excited girls, ready to sing it out. The day began with some highly energised workshops on stage presence and beat boxing. With boots and cats flying all over the place, hundreds of participants united to form one unstoppable human drum kit, and let’s not forget that R600 loop machine which made us all turn green with envy.

Before we knew it we were whisked straight off to rehearsals and a sound check in the Adrian Boult Hall. Minutes passed and the nerves began to kick in. We were more excited about singing together than we ever had been before, but as we waited by the stage door it was as if we were shaking as a single body, all feeling both the same adrenalin and fright at performing in front of hundreds of people. Then one of us said ‘Guys, it doesn’t matter whether we win or not. Let’s just go out there and sing’. So that is what we did. We didn’t know whether it was our best or worst performance – all we knew is that we were out there doing what we have always known and loved.

Everything after that was a blur, and suddenly we found ourselves back on stage alongside the five other groups competing in the Youth Finals. With no idea what to expect and tension rising, we waited anxiously as various thank yous and awards were being given. There was an especially big applause from us for Jo Nicholls, the founder of the Dreamettes and the rest of Putney High’s a cappella groups, who received a special award for one of 10 arrangements she contributed towards the VFUK Finals. Emily Hazrati, a budding young composer in the Dreamettes, also won an award for her arrangement of ‘Budapest’ by George Ezra.

‘The winners brought the programme to life and made great use of the performing space’. This was the moment of truth. As soon as we heard the word ‘Dreamettes’ we all screamed at the top of our voices with shock and pure joy. There was lots of hugging, crying and laughing as we organised ourselves into formation for an encore of ‘Some Nights’. I still can’t find the words to describe how amazed and happy we felt at that time.

Photos, interviews, more hugging and crying, yet it still didn’t end there! After a celebratory dinner at Wagamamas, many of us stayed to watch the University Finals. To say that we were completely awe-struck by the groups we saw performing is an understatement – the genius arrangements, professional-level choreography and musicality blew us away and gave us something even higher to aspire to. We’ve all decided to make our University application based on places where there’s a good a cappella culture! Hosting the evening was the Sons of Pitches, and they were awesome. This made us realise that a cappella carries on even after school and University.

Taking part in the VF-UK finals has helped our group come together and given us inspiration for the future. We’d like to thank Voice Festival UK kindly for such an incredible experience, encouraging us to achieve great things as a group and providing a platform for young a cappella groups across the nation.