Making plans for the next academic year has given us the opportunity to reflect back on all that’s been achieved over the past 12 months – which have flown past in a blur of a cappella magic! Over the next few weeks, our three fabulous programme managers will be sharing some of their favourite memories and moments from our most recent events.

First up is Catherine, who has done a magnificent job of leading our youth groups and group leaders through a series of memorable workshops, webinars and competitions. Here’s what she had to say…

Well, what a year it’s been! From starting working with the Voice Festival at the end of September 2013, it’s been a year (well 8 months) spent living at 100 miles an hour ever since. I have been delighted by the quality and enthusiasm of all our Youth Groups this year so it’s really difficult to pick some highlights but here’s my top 10 (well I think it is anyway – ask me on a different day and I’ll tell you something else…)

1. The sheer number of brilliant boys that have been involved this year. Having never had a male Voice Festival Youth Champion before, it’s brilliant that we’ve had over 150 taking part in the Youth Programme this year. 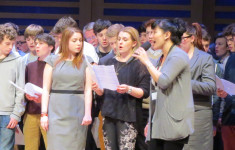 2. Seeing all our participants at Take the Stage standing on stage singing “Hallelujah” with the Swingle Singers.

3. During the Beatboxing workshop with Jack Blume at the Festival Weekend, seeing one of our teachers taking on a student in a beatboxing battle (the student won)

4. Hearing some of our teachers sharing stories and tips in a recent webinar about how they support a cappella in their schools.

6. Some powerful solos throughout the year from every single group that’s taken part. 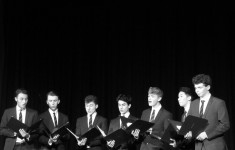 7. The Tiffinians performance of Colder Weather in the Youth Competition Finals which was quite simply spine tingling.

8. Seeing the progress that both The King’s Barbers and Vocal Grange made between Take the Stage and the Youth Competition – just a month apart. (“Soul Sister” and “Crazy Little Thing Called Love” sticking in the mind).

9. Seeing some ex-participants from the youth programme singing in university groups and watching them support their former groups. 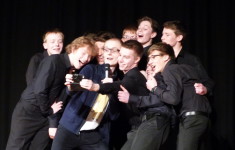 10. Speaking to lots of youth participants completely enthused by a cappella with aspirations to carry on singing in groups way beyond their time at school.

So now we’re winding down for the year and starting to plan next year’s season! If you’ve got ideas then we’d really like to hear from you so do email me at catherine@thevoicefestival.co.uk. The next big thing that the Voice Festival team has been planning is going to be a showcase at the Edinburgh Fringe Festival with a workshop in the afternoon – if you were going to go to sample some quality a cappella then why not try to fit August 8th at Greyfriars Kirk into your schedule!