Attending a singing workshop may seem like an intimidating prospect for beginners – so find out a little more about what they involve by reading our latest guest blog by Kam Sandhu and Houmaa Chaudry. As well as enthusiastically volunteering to help out at our Festival Weekend, the girls found the time to attend Tobias Hug’s unforgettable beatboxing workshop – and loved every second. If you like what you read, why not stop by our workshop at the Edinburgh Fringe Festival this August?

Amongst the non-stop rehearsals and performances at the Voice Festival weekend, groups and guests alike had the opportunity to attend workshops hosted by some rather prominent members of the a cappella community. On Saturday morning, Tobias Hug (a former member of The Swingle Singers, University Final judge and inspiration to many young a cappella singers) led a 2 hour workshop on the art of beatboxing. Despite the room being filled (a huge turnout meant for some fantastic group performances) with a range of beginners and fully fledged beatboxers alike, the workshop catered for all abilities. 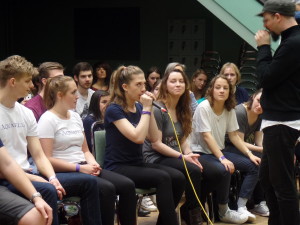 To begin with, a lesson on the basics of beatboxing – and mimicry. Explaining the requirements for a good vocal percussion beat, Tobias walked the attendees through how to form popular sounds without using your actual voice. Even for the beginners in the group (ourselves included), this was a simple way to follow the lead of the more experienced. Through practice and repetition, these sounds were then combined to create short beats of varying genres – even samba was included! After experimenting with different samba beats (and some questionable dance moves on one side of the room) incorporating a vocal version of the seemingly underrated instrument that is the cowbell, it was time to put to use the large turnout at the workshop. The room was split into four groups. One group were allocated a ‘dm’ sound, another a strong ‘ka’ sound, a cymbal-resembling group and the timing-controlling hi-hats. What did this get us? Only a human drum kit! Tobias, along with Ed Scott (Semi-Toned), Tegan Creedy (The Rolling Tones) and a young guest at the workshop, then conducted this ‘beatbox choir’ for some impromptu upbeat music. 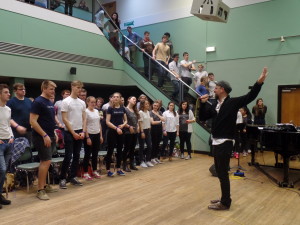 Moving away from the entirely musical aspect of beatboxing, the group then began to recreate the sounds of a tropical thunderstorm, leading onto an extravagant movie plot to which we could create an entirely vocal soundtrack. About 15 minutes later, the movie soundtrack in all its finished glory was performed. Had you been standing on the other side of the door, you would be forgiven for thinking we were watching an award-winning film (albeit with a very strange plot) inside. Beginning with a perfect rendition of the 20th Century Fox tune, the scene was then set in a rainforest from which marched an army. It was a battle of humans versus animals. Arrows were shot, grenades were thrown and even a cannonball was launched. The conclusion of the story was that the opera singers broke the glass and won the battle. No, it didn’t make any more sense had you witnessed it in person, but it provided an incredible soundtrack nonetheless! Some of the standout solo sounds from the soundtrack had to be an oddly-placed (but ingenious) rendition of Rue’s Whistle (From The Hunger Games), a dolphin impression, an eagle whistle and a scarily good impersonation of Chewbacca (Star Wars) – so if any of those were your doing, give yourself a pat on the back! 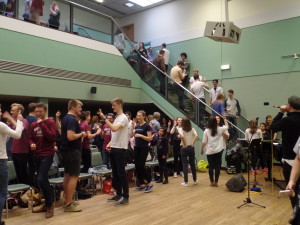 The workshop was rounded off with an improv circle (it wasn’t really a circle – more like a line) where 4 singers were asked to create a part (on the spot!) to complement the parts created by the others. Together, this created a musical piece that could be conducted by Tobias to vary the volumes and add news sounds, therefore experimenting with the sound as a whole. And in case you don’t have enough people to recreate a whole musical piece for yourself, Tobias then demonstrated how you can do this yourself with the help of a loop pedal! Using a 5 channel loop pedal, and with a little help from those in the audience, the final product of the workshop was a well-timed, brand new tune that will be playing in our minds for weeks to come.

As always, thank you to Tobias Hug for hosting the workshop with such success, as well as to the volunteers that bravely agreed to stand up in front of the rest of the group and conduct or sing/beatbox on the spot! We’re sure we don’t just speak for ourselves when we say that it was a truly incredible and invaluable experience.