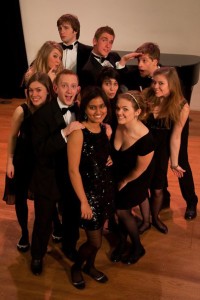 Recently left university and wondering how to keep a cappella in your life? Some of you may remember last year’s ‘A Cappella Ever After’ blogging series in which former members of university groups shared their secrets of post-university a cappella. By popular demand, we have restarted the series to help you find inspiration for kick-starting your own a cappella antics after earning those hard-earned degrees. For this instalment, Alex Kaiserman tells us how his time in the Oxford Gargoyles shaped his own post-university experience.

I first got involved in a cappella singing at school through BABS, the wonderfully bizarre British Association of Barbershop Singers. I joined my local chorus and formed a quartet with some friends. I’d always been interested in arranging and composing, although my efforts had mostly been limited to wildly ambitious projects performable only by the glorious 128-polyphony Windows MIDI set. Through acappella came the realization that real people could perform my arrangements too, and I set about learning the basics of jazz and barbershop harmony.

At University I joined the Oxford Gargoyles, a mixed jazz a cappella group at Oxford, becoming musical director the following year. It was an amazing experience with plenty of highlights, including tours to the US and runs at the Edinburgh fringe. We competed in the Voice Festival both years I was in the group, winning it in my first year. I also picked up a couple of best arrangement awards, which I’m still pretty chuffed about, and received a lot of great feedback from judges and workshops throughout the year.

As an arranger, the Gargoyles were a pretty fabulous resource – a group of very talented musicians who were able and (usually) willing to realize even the most outrageous musical visions. Since I missed hearing my arrangements performed when I left the group, I started arranging for other groups and choirs for a bit of extra cash. My brother, also a singer, had been making teach tracks, and he suggested we combine forces to offer ‘packages’ of original arrangements and learning materials. We set up a website (www.strikeforcemusic.com) and the requests started coming in. It’s been a fun challenge to try and stick to briefs and empathise with groups of varying abilities to write music that’s both fun and accessible.

Obviously it doesn’t pay the bills, but it’s been a fun way to stay involved with a cappella and music in general. If you’re interested in arranging and want to keep it up post-uni, put yourself out there, there’s plenty of demand for original, tailored music. And if you’re stuck for a place to sing, check out your local barbershop chorus; trust me, it’s brilliant fun, and you won’t get a warmer welcome.

If you’ve found your own way to forge a post-university a cappella path – and perhaps want a new way to promote your new ventures – email us at voice@thevoicefestival.co.uk. We’d love to hear what you’ve been up to!