We’re thrilled to bits that so many ex a cappella group members are putting their singing skills to good use by pursuing exciting careers in music and the arts. Recently we caught up with Jack Blume (ex-member of Voice Festival UK finalists The Sons of Pitches) to suss out what he’s been getting up to since leaving the group… kind of.

Tell us about your experiences of a cappella and singing at University? 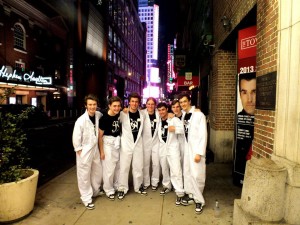 In my final year of university I was in The Sons of Pitches from Birmingham. I was involved in many different things whilst at uni, but being in The Sons of Pitches was without a doubt the most exciting: it was quite a whirlwind of a year. We would rehearse for 3-4 hours a week, and then perform very regularly at all sorts of events, functions, balls, fundraisers, gigs and shows throughout the year. At our busiest points in the year we had 3 or 4 gigs in a week, sometimes multiple in one night! Half way through the year we competed in the Voice Festival competition which is always a fantastic opportunity to meet other uni groups from around the country, and from that we managed to win ourselves a spot in the finals of the International Championships of Collegiate Acappella, and flew over to New York to compete there. That was insane, thrilling, probably the best week of my time at University. Then in the summer, a couple of months before I graduated and left the group, we performed at the Edinburgh Fringe Festival with All The Kings Men and some other amazing groups, recorded our debut EP with the fantastic American recording company Liquid 5th Productions (which will be coming out in December) and had a small UK tour to finish it all off. So after all that, the seven of us were very close, very stupid around each other, and I was very sad to leave. But I can’t wait to see what they do next… if you’ve seen their latest video, they’re having an explosive start to the year.

How is music shaping what you’re doing now? What’s it like trying to find your feet in music post-uni?

As soon as I graduated I set about shaping the start of a freelance career as a film and theatre composer. That’s what I’ve wanted to do for a few years now, and while many of my friends seem quick to label me as ‘unemployed’, I’ve not approached it that way at all. I’ve taken a very conscious decision to focus all of my time on starting as a freelancer, which means building up enough contacts, experience and a good enough portfolio to start earning the kind of income it’s possible to live off… so it feels exactly like a full time job! So far, in the last 3 months, I’ve composed music for a tap-dance/hip-hop musical, which was a commission from a big theatre and was premiered on the 7th November, and scored music to a TV commercial for an energy drink. I have scores for two short films in the pipeline, and am working on a Rock n’ Roll production of Shakespeare’s Twelfth Night for a company called The Chrysalis Collective, which will be staged in April through the RSC’s Open Stages scheme.

Aha, a cappella, yes. I set up a new group based in London called Fluxus. We’re a mixed, 5-person group, and while I’m very excited to get the ball rolling, it’s proving much harder to organise regular rehearsals with a post-university group than at uni when everyone’s in the same place every day. From what we’ve done so far though, it’s looking very exciting, and we’re hoping to get a video online very soon. I’m also running occasional Vocal Percussion workshops and masterclasses for groups who want to get more out of the percussion in their arrangements, and have been lucky enough to continue as a dep for The Sons on occasions where their brilliant new beatboxer Mide can’t make it (including a massive gig at the NEC!)

What’s the best advice you’ve received about working in the music industry, and why? 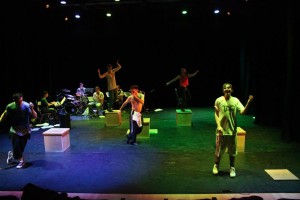 Tough question! I think it would have to be advice I’ve been given about ‘people skills’. And it’s something I’ve definitely found to be true… being the kind of collaborator who is easy to work with, efficient, professional, and always creative makes all the difference: people want to work with you more and more if they enjoy the experience and if you get the job done without any trouble. I think those skills are almost more important than anything else.