We’re back for the second instalment in the A Cappella Ever After series, in which Anoushka Lucas, former member of the fabulous Oxford group In The Pink, reveals the musical pathway she has forged post-graduation… 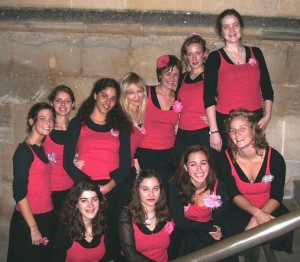 If you asked me in 2005 what I most loved doing, I would’ve said singing. The thing was I didn’t really believe that was a viable career option… so I went to university to read Russian and Italian instead. To tide myself over while I figured things out, I joined an a cappella choir called In The Pink (started by the Voice Festival’s very own Alexandra Godfree!).

In the Pink was fun, and silly, and surprisingly hard work. We rehearsed twice a week and those rehearsals gave me two really important things beyond just music: 12 friends who were separate from everything else, and a complete break from whatever essay I was failing to write. I learnt about the importance of warming up and rehearsing as well as the value of working in a team. Plus we got to go to loads of excellent balls and parties. When we eventually got up to the Edinburgh Festival in August of that year I had one of the funnest weeks of my life (and we got some 5 star reviews too!). 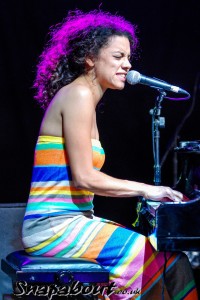 By the time I left university 4 years later, I had worked up the nerve to try and be a professional singer. I gigged around the London singer-songwriter circuit for a good year before deciding that I’d rather not be alone up on stage and roping a whole bunch of musical friends into becoming my band. I met a playwright and started writing musicals with him, one of which has just been commissioned to be on in summer 2014. This year I won a competition run by Jazz FM and got to open their Love Supreme Festival, which rivals In the Pink at Edinburgh as one my favourite ever gigs. All the things I learnt whilst being in an a cappella choir are still true: you have to practise songs a lot before you gig them, sometimes people don’t listen to you, making music as a collective can be both hugely exciting and incredibly frustrating, always try to warm up if you can… and also, singing on stage in front of an appreciative audience is one of the greatest feelings I know. If you feel that way too, keep doing it.

Do you have a post-uni story to tell? Email beth@thevoicefestival.co.uk if you’ve found an exciting new way to enjoy stretching your vocal chords!