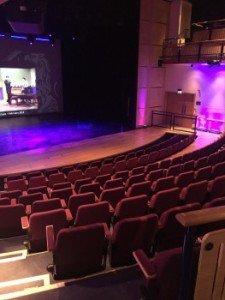 The 2016 Festival Weekend will be held on the 8-10th April 2016 at Hampton School, London. As usual, in addition to the usual variety of workshops, recording opportunities, performances, discussions and networking opportunities, we will be holding the finals of our Youth and Community competitions, and the semi-finals and final of our University competition. You can see a full timetable of events here: Festival Weekend 2016 timetable.

Tickets are no longer available to purchase online.

Tickets on the Day

Arriving by car
Hampton School is easily accessible from the M3 and the A316. If travelling from west or via the M25, join the M3. After junction 1 the M3 then becomes the A316 – leave at the first or third junction (A312). From the south and south east use Hampton Court Bridge. From the east come through Kingston, Teddington or Twickenham. From the north east come via Richmond and the A316.

There is free parking onsite for up to 100 cars.

Arriving by bus
The Theatre is easily accessible from Kingston, Hounslow and Twickenham via the bus services 111 and the 281. Both run night services. The R70 stops near the school. The 216 stops at Hampton Station and the nearest R68 stop is ten minutes away.

Arriving by train
Hampton Railway Station is a 20 minute walk away. The station is in the London Borough of Richmond upon Thames and is on the Shepperton branch line. It is in Travelcard Zone 6. The station and all trains serving it are operated by South West Trains and the trains run on the Waterloo-Shepperton line.