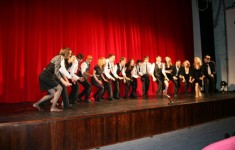 2012 has been In the Smoke’s (ITS) most creative year yet – we’ve experimented and we’ve really tried to push musical boundaries (as those who saw us perform “Into the Void” by Nine Inch Nails can certainly testify). And in no small part, we have the Voice Festival UK (VF-UK) to thank for it.

It seems a long time ago that, with hopes as high as our soft palates, we descended upon the Greenwood Theatre, London, in February for the Voice Festival UK (VF-UK) Community Competition 2012. So much has happened since then, what with the Diamond Jubilee, Olympics and Paralympics all happening right on our doorstep – and that’s before we even get to our activities. So what has ITS been up to since being crowned Voice Festival Community Champions 2012 and winning the 2012 Outstanding Arrangement Award?

Well, back in March we had the privilege of being invited to sing at and compère the VF-UK Youth Competition. The talent, enthusiasm and sheer energy of the young singers, arrangers and MDs we met was genuinely inspiring.

Follow that with a three-day musical retreat in Norfolk and a run of successful gigs around London (including the Dulwich Festival and a joint gig with fellow London-based a cappella group The Refrains), and you can see why 2012 has been a great year for ITS.

Then, in July, we claimed our Community Competition prize: a workshop with the force of nature that is Swingle Singer and VF-UK 2012 judge Clare Wheeler (@dinkyswingle for the Twitterati among you). She took time out of her hectic touring schedule to help us look at our repertoire in a completely new way. Experimentation with sound was very much the session’s focus, as well as the use of choreographic cues to aid the audience’s appreciation of the music. It was a blast! Clare is seriously cool and we feel very lucky indeed to have worked with her.

At the end of a long day when you’ve had complete ‘mare of it at work, it’s raining and cold outside and you’ve rushed to get to a stuffy, strip-lit room for a dreaded choreo-focused rehearsal, it can be easy to lose sight of why we come together at all each week to sing a cappella. But the process of preparing for this year’s Competition – as well as the recognition we got for our efforts in actually winning – has given us in ITS a confidence and focus that has lasted much longer than your typical post-gig high.

So, what next for ITS? Well, the lyrics of ITS’ first original song say it all: “We’re not done yet”! Expect big things from us for the rest of 2012 and in 2013 – from bigger, more ambitious gigs to new arrangements to a follow-up to last year’s smash-hit “a ca-pantomime”.  Maybe even a spot of recording, too. And, of course, a blinding Voice Festival UK Community Competition performance – after all, we do have a crown to defend!